Last year I was in the village of Barkby in Leicestershire in search of my Smith ancestors, I should say ancestor because I have been unable to find anyone who is connected with my 6th great grandmother Susanna Smith. Susanna does not seem, at present, to be a member of any of the Smith families living in the village - not that there were many - in fact in the years from 1588 until 1771 they numbered less than fifteen. Five of those can be found in the late 16th to early 17th centuries listed under the spelling of Smyth, the rest are listed under the modern spelling and lived in Barkby between 1710 and 1771. Of the later Smiths there are just two families - one headed by John Smith whose wife was Elizabeth Plant and a John Smith whose wife was Mary and as just mentioned Susanna cannot be linked to either of them. So who was Susanna? Why was she alone in the village and why was she there? I think that the answer to these questions lie in domestic service. 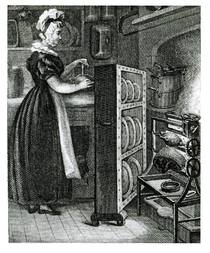 Barkby is a village whose landscape is dominated and surrounded by large fields and woodland, it is cut in half by a large estate that has at its centre a Georgian house. It is in this house that I believe Susanna may have been employed in the years before her marriage. 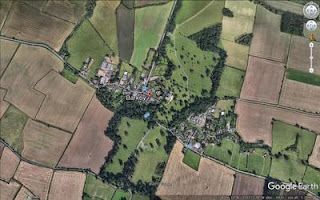 A 17th/18th century servant girl was usually young and unmarried and would work in this environment until she married and started a family of her own. Girls born and bred in the country could be found working in the homes of the aristocracy and in the houses of local gentry, like the Pochins who owned Barkby Hall. 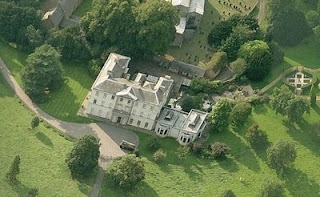 I haven't proved that Susanna was employed here and when researching your family history you must never jump to conclusions, however Susanna is typical of the female 18th century domestic servant - young and unmarried. Maybe the next clue to Susanna's ancestry is that she was not a hired stranger, but was distantly related to someone who already worked at the house or new of a position there.
Posted by Andrea Povey at 13:42 No comments:

Vincent van Gogh once wrote, “Real painters do not paint things as they are, they paint them as they themselves feel them to be.” 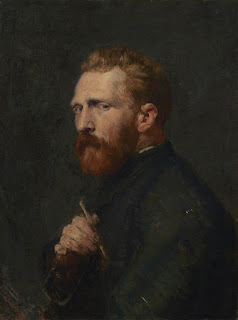 Vincent Van Gogh painted numerous paintings of wheat fields during his short life, his last few paintings before his death were concerned with this subject. Is the act of painting the same subject over and over again the result of inner torment? Edvard Munch did the same, he painted a jetty with two distant male figures walking away at least six times - his painting the Scream being the most famous. Churchill did this as well, the pond in his garden at Chartwell was the subject of a number of his paintings.

Vincent Van Gogh’s painting Wheatfield with Crows is thought to be his last painting before he died on the 28th July 1890 and he stated only eighteen days before his death that his wheat field paintings, that often featured stormy skies, were an 'expression of the sadness and extreme loneliness'. He said his work expressed what he felt unable to say, that is, ‘how healthy and invigorating he find the countryside'. This is a little bit confusing, no wonder we find him so intriguing. Some say Vincent van Gogh was ill, others crazy, his bursts of intense work and times of melancholy point to some kind of mental illness something his brother Theo suffered from too.

So what was the significance do you think of his wheat field paintings then? Was it just a representation of the wonders of nature or a painting filled with doom and an omen of death? From his words, either spoken or written, and from the way he acted and painted it is almost as if he were two people who were constantly in conflict with one another, sadly for the man as a whole, this was far too much to bear.

Vincent van Gogh died from an infection following a self-inflicted gunshot wound to his chest at a wheat field at Auvers-sur-Oise on the outskirts of Paris.
Posted by Andrea Povey at 10:30 No comments:

My grandfather was born in a house to the right of the building with the white roof, on Bank Street in Newquay in Cornwall. His former childhood home was one of three/four terraced houses that mirrored others across a yard. 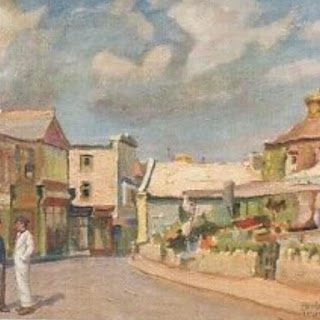 In the early 1980s he took me to see the house and we accessed it by a small alley. The houses were derelict by then and were soon pulled down, what we didn’t know was that would be replaced with a building, quite out of character with the town, that would eventually house Barclays Bank. 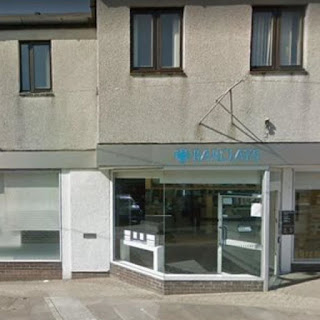 In a statement released last week Barclays Bank said it intended to close it’s doors to customers meaning that, for the first time in over a hundred years, there will be no banks on Bank Street. Banks began to appear in the town at the the turn of the 19th century, just before my granddad was born and when Newquay grew from a small fishing village to a popular holiday destination.
I wonder what he would say about this? 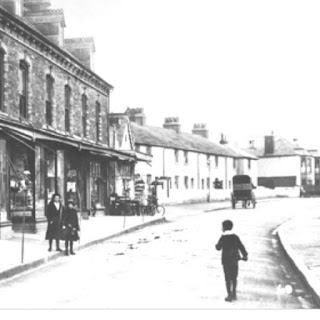 I’ve loved Newquay all my life, but over the years I’ve watched it go downhill ruined by awful modern buildings, and I find myself looking upwards over the gaudy shop fronts to what is left of the old town and longing for days gone by.
Posted by Andrea Povey at 10:30 No comments:

On the 25th July in 1795, the first stone of the Pontcysyllte Aqueduct was laid, an important build for my coal mining ancestors. 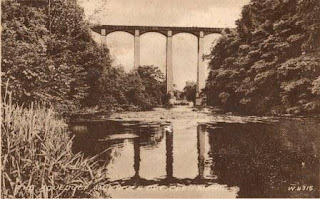 At the age of twenty four, William and Esther Taylors eldest son John was working as a iron labourer, he would be involved in excavating the iron ore or working the furnaces. Much of what was excavated here and in the other mines in the area was exported by canal over the Pontcysyllte Aqueduct on the Shropshire Union Canal to the many iron foundries situated in Manchester.

The 1851 census tells us that John was single but had already met and made arrangements for his marriage. As we know John was a labourer but it maybe that at some point he was employed on the canal boats that carried the iron ore to Manchester and this is probably how he met Elizabeth who was born there. Within two months of their marriage Elizabeth was pregnant with their first child. Encouraged by what he saw and heard in the foundries in Manchester and Worcester he realised that employment in the town would offer more security and better prospects than that of Ruabon were at least two of the mines had flooded and had to close. In early 1852 with the birth of their son John, the family moved into a house on Woodside in Worcester where in 1854 Joseph Taylor was born. John may have worked for a short time for Thomas Clunes whose owned iron and brass foundries in the town and who were building a new foundry which was to become known as the Vulcan Iron Works this would have created many new jobs in the area but John had already looked for and found work in the coal mines of Brierley Hill Staffordshire.
The Taylor's story continues here
https://meanderingthroughtime.weebly.com/joseph-taylor.html

Posted by Andrea Povey at 12:21 No comments:

Did you know that the term 'Daylight Robbery' may have its origins in the Window Tax act of 1696?
Following an Act of Parliament houses with less than ten windows were asked to pay a two-shilling house tax and were exempt from the new window tax and those whose homes had more than ten were liable for an additional tax on every window.
The government were targeting the more wealthy in society and in theory a window tax was a good idea. However, by the time of the Industrial Revolution, this tax, when applied in towns and cities, was causing great suffering. The government had not gone on to issue clear guidelines as to the definition of a window and this led to any small opening in a wall being taxed as if it were a large window. Landlords, who owned many tenement blocks with numerous 'windows' boarded them up thus creating a breeding ground for diseases such as typhus, smallpox and cholera and the problem was nearing the point of an epidemic. 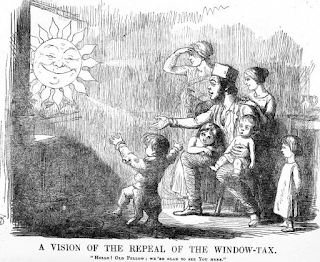 In Sunderland in 1845 this very point was noted
'the very evil effect and operation of the window tax; and they do not hesitate to declare that it is their unanimous opinion that the blocking up of the numerous windows caused by the anxiety of their owners to escape the payment of the tax, has, in very many instances, greatly aggravated, and has even in some cases been the primary cause of much sickness and mortality.’
It was on the 24th July in 1851, after years of campaigning for the abolishment of the window tax that the 1696 Act was repealed.
Posted by Andrea Povey at 12:17 No comments:

​Did you know that Walt Disney bought the film rights to Alice in Wonderland in 1938 along with the wonderful illustrations by John Tenniel and he hired English writer Aldous Huxley to re-write the original script? 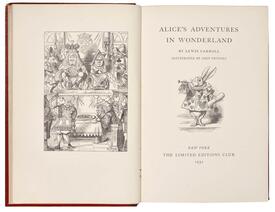 Trouble with adapting Tenniel's drawings into animation and the onset of the Second World War halted production and it was not until 1946 that production restarted. It was on the 26th July in 1951 that Walt Disney premiered his film in England.Of Alice in Wonderland Disney said..."No story in English literature has intrigued me more than Lewis Carroll’s Alice in Wonderland. It fascinated me the first time I read it as a schoolboy and as soon as I possibly could after I started making animated cartoons, I acquired the film rights to it. People in his period had no time to waste on triviality, yet Carroll with his nonsense and fantasy furnished a balance between seriousness and enjoyment which everybody needed then and still needs today."I loved the film and remember the very first lines (I have to admit to looking up the exact wording)'for if he does and had been of late much accustomed to usurpation and conquest. Edwin and Morcar, the earls of Mercia and Northumbria declared for him, and even Stigand the Archbishop of Canterbury, agreed to meet with William and offer him the crown.' 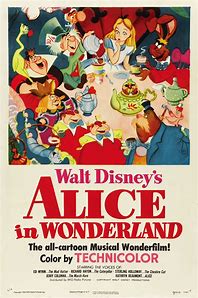 Eleanor of Aquiaine and Louis VI of France

​On the 25th July 1137 Eleanor of Aquitaine married the son of Louis VI of France, and on Christmas Day 1137 she was queen of France.  An intelligent and feisty woman, Eleanor is said to have to have arrived at the cathedral town of Vezelay dressed like an Amazon galloping through the crowds on a white horse, urging men to join the crusades. She also had every intention to go herself, accompanied by three hundred of her ladies dressed in armour and carrying lances.
Louis found Eleanor overpowering and demanding, he was exceptionally devout and preferred a evening of prayer in his chapel rather than a night in his wife's bed, on many levels Eleanor was too much like hard work. However, he suffered her for fifteen years until their marriage was annulled on the 21st March 1152. 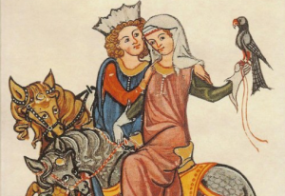 Despite being adverse to Eleanor's charms, he managed to father two daughters, however the birth of their second child was a blow for Louis personally and for his dynasty. What Louis needed was a heir and that meant a son, not a daughter.
Louis VII would marry twice after the end of his marriage to Eleanor fathering three more daughters and a son.
Eleanor's vast estates, from River Loire to the Pyrenees came under her control and within three months she would marry Henry, son of Matilda of England and Geoffrey of Anjou and she would later become queen of England. ​

Posted by Andrea Povey at 10:30 No comments: